Recently we had Brendan (Brendo) Reeves back in the U.S. rally scene and back at Team O’Neil.  If you aren’t familiar with Brendo, he was the 2013 Rally America (RA) 2 Wheel Drive Champion who raced under the Team O’Neil banner.  Brendo is from Australia.  He made the recent trip during the build up for the New England Forest Rally to train Lucy and Lia Block in preparation for the rally.  He had the opportunity to stick around with Travis Pastrana and his sister Rhianon Gelsomino after the rally and play at Team O’Neil.  We were excited to get the chance to catch up with Brendo and add his story to the 25 Years of Team O’Neil this year. 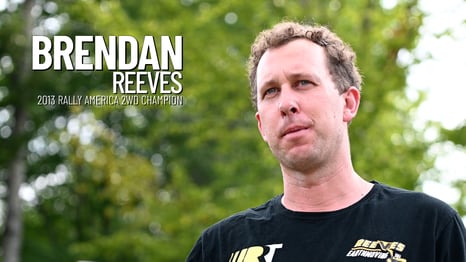 In 2011 Brendan had won an opportunity via the Rally Star driver program and was able to be a part of the WRC Academy (Jr WRC), where he competed driving an R2 Fiesta for 6 rounds in Europe in the first year.  By the 2nd year the team of his sister Rhianon (Gelsomino) and him had to raise money themselves and look for sponsorships.  “After looking at what we could do, we realized we couldn’t keep going at the WRC level.”

In 2013 Rhianon, who was living in the states, had talked with Tim O’Neil and found that they could lease one of the cars from Team O’Neil to compete in Rally America.  Rhianon told Brendo about the opportunity.  This would be a new experience for Brendo, and he was excited to try his chance in Rally America.  “The variety of cars would be so different, because the class we’ve been in were all R2 Fiesta’s.  Whereas we would be going into Open 2 Wheel Drive.” 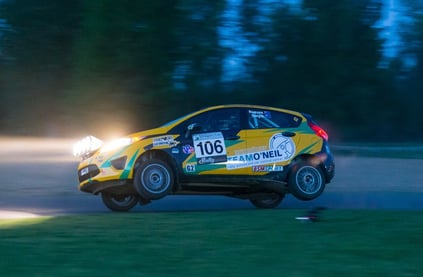 Brendo and Rhianon entered the 2013 RA season at the 3rd round, Oregon Trail Rally (OTR).  With the first 2 rounds going to Andrew Comrie-Picard (ACP) and his Scion, it was going to be a difficult season for the team to catch up, but they headed into it with the goal of winning rallies.  The first stage at OTR would be the super special stage at Portland International Raceway.  Tim optioned for the team to use racing slicks and they started off setting real great time on that stage.  They would go on to win the 2WD class in this rally after capitalizing on a strong start.  “The car ran really well.  We worked with young Pascal (rally mechanic) and his brother, really good.  I got really excited by all of this, Rhianon and Tim got a real kick out of it, and it started to evolve from there.” 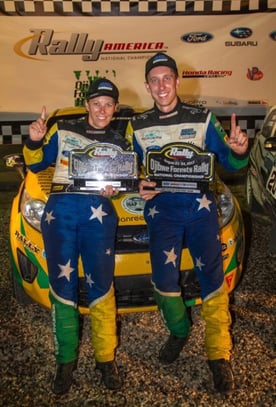 The team would continue the remainder of the season for the next 4 events, back-to-back.  “We started in the 3rd round of the season.  It definitely wasn’t easy.  We had ACP racing against us in the Scion.” Brendan credited the Scion as a fast car and they had a tough competition in ACP, “We were a little bit underpowered to that car, but we knew we could use our pace notes ability and Tim’s knowledge as well, to drive out for the championship.”  The season didn’t start out as chasing for the championship, but after a few wins, it was a reality.  “It took 2 to 3 wins before it started to evolve into ‘Hey do you think we can win the championship?’”

The championship came down to the last round, Lake Superior Performance Rally (LSPR).  They had won the last 4 events and to capture the season, Brendo would need to win this round also.  The rally proved difficult with a challenge of the sandy base surface, but the real kicker came when they had to deal with weaving through the chicanes.  “Each time we’d slow down for the chicanes, for some odd reason the wheel scrapers on the back would come forward and lock the rear wheels.  Coming out of the chicanes I would have to pump the hand brake again to get it unlocked.”  This caused the team to keep losing a bit of time, but ACP was also dealing with some boost issues too.  The final stage of LSPR would be the deciding factor as their times were extremely close.  “I just remembered in the last stage; we just drove our asses off!”  The technical stage was well suited for their car, unlike the earlier fast stages.  At the end Brendo and Rhianon would claim 1st in 2WD and win the 2013 Rally America 2 Wheel Drive Championship. 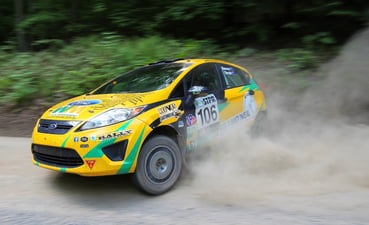 Brendo and Rhianon were a fantastic duo with their notes and driving.  Brendo also credited the success of that season to Tim.  “I learned more from Tim at each rally.  Tim was able to give me advice on the surface and different things on what we were going to do.  It was quite hard to organize tires as we were on a tight budget.”  To top it off, Brendo had experience from WRC Academy, but at the academy he was only able to adjust suspension clicks and didn’t have the experience of adjusting ride height, toe, camber, caster, etc.  “Tim’s knowledge was extremely beneficial as he helped us get the proper set up so we could drive well on each of the stages.” 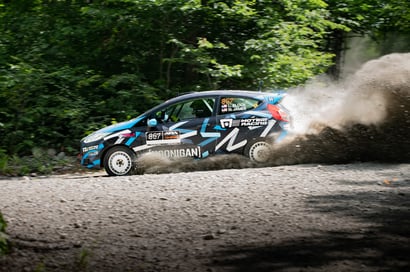 The Team O’Neil facility has been very valuable in the development of Brendo in the 2013 season.  “I found it really good.”  He said about the roads.  “It was quite technical with jumps and quite fast.  In the R2 it was really good, because you can put that car to its limit pretty quickly, going at a rapid pace.  I believe the more challenging the roads, the better it is for you to understand a really good setup for rally.  So, I really liked that.”  These same roads were recently used for him to coach Lucy and Lia. 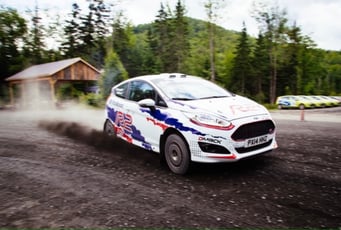 In 2015 Brendan returned to the U.S. and Team O’Neil to prepare for the New England Forest Rally in partnership with M-Sport.  He was a part of marketing M-Sport’s new R2T Fiesta in the U.S.  Brendo took 2 days to train at the Rally School and get comfortable with the new car and then raced it at NEFR.  Brendan placed 6th overall and did not podium as there was no specific class for the promotional vehicle to be placed in at the time.

“Team O’Neil is unique.  The rally schools in Australia are often a short experience on a short course.  Sometimes people show up for a half day experience or a few hours.  Whereas at Team O’Neil, people are purchasing 3 days to 5 days packages and gaining knowledge of being a proper rally driver.  The facility is so much bigger.  It is capable of being able to run rally schools and proper rally testing at the same time.  Seeing the facility evolve over the years has been really good.”  Brendo has said about Team O’Neil. 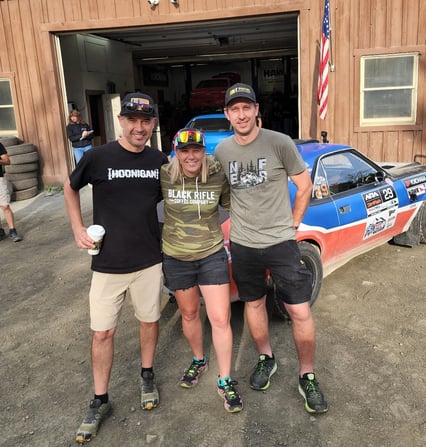 Thank you, Brendan Reeves, for allowing us to share your Team O’Neil story.  It was great to have you back at the property and excellent to see you drive Tim’s AMX.  We look forward to your next visit here, you’re always welcome at the Rally School.


If you'd like to share your Team O'Neil story with us, please submit it here: Your Story

If Brendan's story has piqued your interest and you want to know more about Team O'Neil check out our website here: Team O'Neil