In September, Team O'Neil Founder Tim O'Neil, provided his 1973 Ford Capri to Tim Winker and Ralph Beckman for use in the Great American Mountain Rally Revival.  The article below was provided by Winker regarding the event, it's history, how they performed, and a little background on Winker and the Capri. 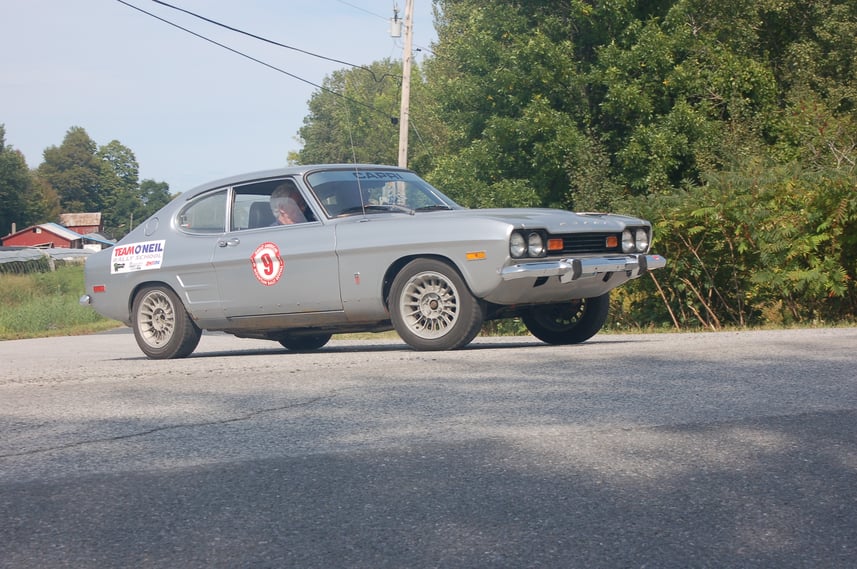 The Great American Mountain Rallye was a challenging 1500 mile, three-day endurance event to tackle the mountains of New York, New Hampshire and Vermont in the 1950s. Intended to be a North American version of the classic European rallies such as the Alpine Rallye, The Tulip Rallye and the Monte Carlo Rallye, the GAMR was awarded sanction by FIA. Instead of the classic mountain passes of the Alps such as the Stelvio and the Col de Turini, GAMR offered Smugglers Notch and Lincoln Gap. The promise of a major rally on American soil lured factory teams from Europe to participate. Internationally known drivers such as Sheila Van Damm, Stirling Moss, and 1953 Monte Carlo Rally winner Maurice Gastonides were among the participants in the GAMR. The rallye took place over the Thanksgiving weekend from 1953 through 1956, with snow and cold adding to the challenge of the mountain passes.

In 2018, Steve McKelvie and Gary Hamilton organized a modern version of the GAMR for vintage cars, utilizing many of the roads from the original routes. The Great American Mountain Rally Revival took place in October 2018 to hopefully avoid the snow and cold of the original GAMR. After McKelvie's death in early 2019, Hamilton took on the task of continuing the event to honor his friend. Covid restrictions caused the cancellation of the 2020 Revival. Hamilton decided to concentrate on roads in Vermont for 2021 and enlisted John Buffum, winner of 11 National stage rally championships, to create the course based out of Stowe.

About 20 cars registered for this year, with several potential Canadian entries kept away by Covid restrictions. Ultimately there were fifteen starters, the oldest being a 1951 Hudson Pacemaker driven by Greg and Lynn Davis from Ohio. The only other car in the Original category (cars that could have entered the original GAMR) was a 1954 Chrysler New Yorker Deluxe driven by Wayne Dix with his daughter Bronwyn as navigator. Entrants came from as far away as Florida and California.

Day one consisted of registration and a short rally to acquaint teams with the Richta scoring system, which relies on GPS to confirm when a team passes a scoring control. With a GPS system such as Richta, there is no need to for manned checkpoints. Tim Winker and Ralph Beckman in the 1973 Capri provided by Tim O'Neil of Team O'Neil Rally School established that they would be difficult to beat, scoring only three seconds error over the four controls. First day scores were not included in the eventual total.

The Day Two route took teams north, beginning with a climb over Smugglers Notch. The rally route was a loop to the north, near the Canadian border, and including roads on Grand Isle. Winker and Beckman finished the day in the lead with a total of 12 points (one point per second error over twelve controls), well ahead of the second place team whose total was 82.

On Day Three the route headed south with crossings of Lincoln Gap and Appalachian Gap. There were also several covered bridges along the route. Once again Winker and Beckman dominated in their Capri, adding only six points to their score for an overall total of 18, and capturing the 1st place trophy in the Classic category (1958-1978). The second place team of Edward and Douglas Sain in a 1995 Toyota Celica Convertible finished with 201 points, taking first place in the Modern category (1979-1999). 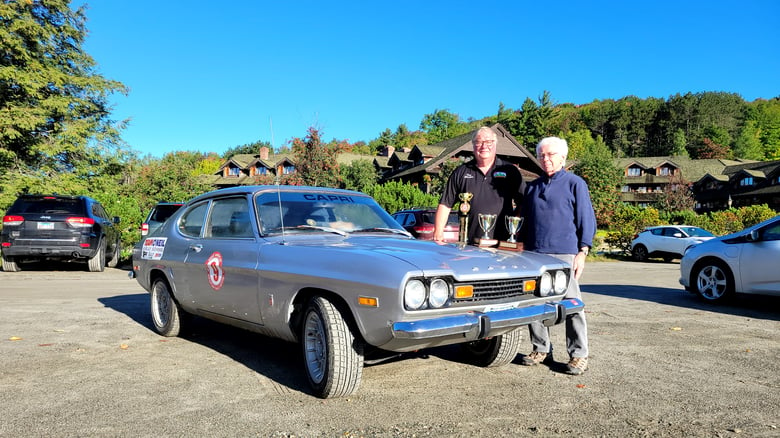 The Capri V6 performed flawlessly over the 400 mile rally route, handling like a dream and providing adequate power when needed. A performance exhaust system gave a growl of authority as the car accelerated to speed.

Tim Winker is the former publisher of the Saab Club magazine, NINES, who became interested in the original GAMR as the 1956 rallye was SAAB's introduction to the U. S. market. Their three-car team of Saab 93s were among the first brought to America by the newly formed Saab Motors in 1956. Led by Saab engineer and successful rally driver Rolf Mellde, a SAAB placed first overall, driven by Bob Wehman with Louis Braun as navigator, and SAAB won the Manufacturers' Award. As a fan of both SAABs and of rally, Winker hoped to someday visit the route of the original GAMR.

He entered the 2019 GAMRR with another long time rallyist, Clarence Westberg, in a Triumph TR6. They led overall until a fuel pump failure caused them to miss a leg and dropped them to mid-pack in the final scoring.

Winker entered the 2021 GAMRR hoping to hitch a ride in an early SAAB to celebrate the 1956 SAAB victory. Tim O'Neil owned a likely candidate, a 1967 Saab 96, but it needed work. O'Neil instead offered a 1973 Capri as an alternative. With some help from Buffum, Winker joined up with Ralph Beckman, another long time rally navigator.

The Capri was already a decent choice for rallying, as Capris were often on the entry lists of local rallies when the car was new. With a 2600cc V6, it had decent power. 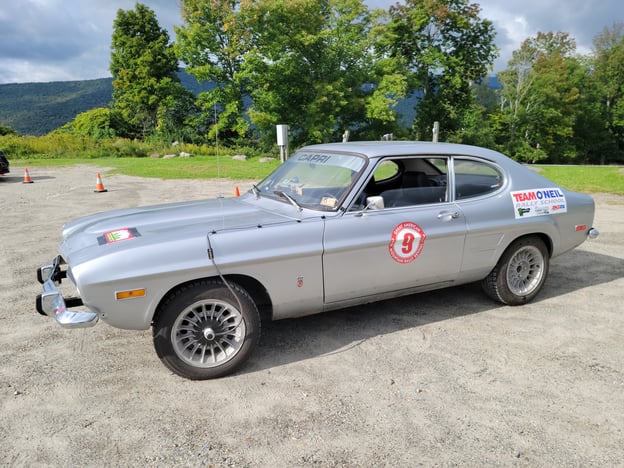 Thank you Tim Winker for providing photos and this article to cover your Great American Mountain Rally Revival win.  We're glad to hear the Capri worked well for you and Ralph.

Check out other blogs and stories: Team O'Neil Blog

Looking for how-to, tips, and other videos that could be beneficial: Team O'Neil YouTube Channel

Remember to subscribe below for our E-Newsletter where we provide monthly updates, stories, recaps and previews of the what's going on at Team O'Neil.

Ready to get in the seat and learn: