The Mt Washington Hill Climb, or Climb to the Clouds as it is now known, is one of the oldest automotive races in the country. Due to the unpredictable weather conditions and the technical nature of the road, it is one of the most demanding and difficult races in the world. The Mt Washington Auto Road features some of the gnarliest terrain in the United States. The heavily crowned narrow road winds its way to the finish line at 6,260 feet through a wide variety of terrain. Drivers face rough frost heaved tarmac, loose gravel, crests, jumps, blind corners, fast corners, tight hairpins and deadly drop offs guarded by nothing except car destroying jagged rocks lining the road on their ascent to the top of the mountain. The Mt Washington Hill Climb first ran in 1904. Harry Harkness was the first record setter in a 60 horsepower Mercedes with a time of 24 minutes and 37 seconds. 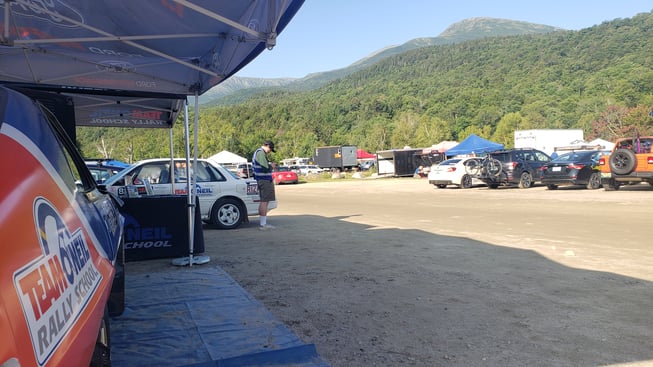 The event was held off and on for the next 57 years with many records broken and smashed as technology and driver skills progressed. After a long hiatus since 1961, the event returned in 1990, and it is here where our story begins. 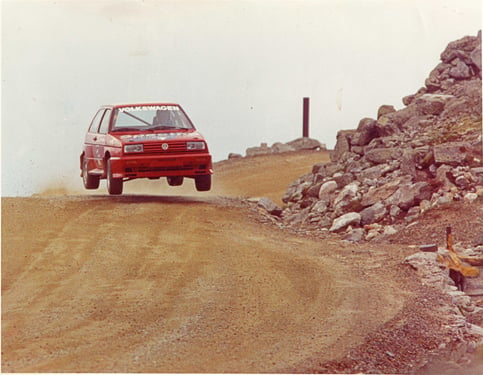 Piloting his Rallye Golf, the founder of Team O’Neil, Tim O’Neil, set a new world record with a time of 7:45 up the Auto Road. Tim has competed in the Mt Washington Hill Climb since his record setting run in 1990. He has most recently competed in an electric EVSR in 2014 and Team O’Neil’s Ford Focus RS rally car in 2017. But for this year, Tim would be racing a very special car up the hill. 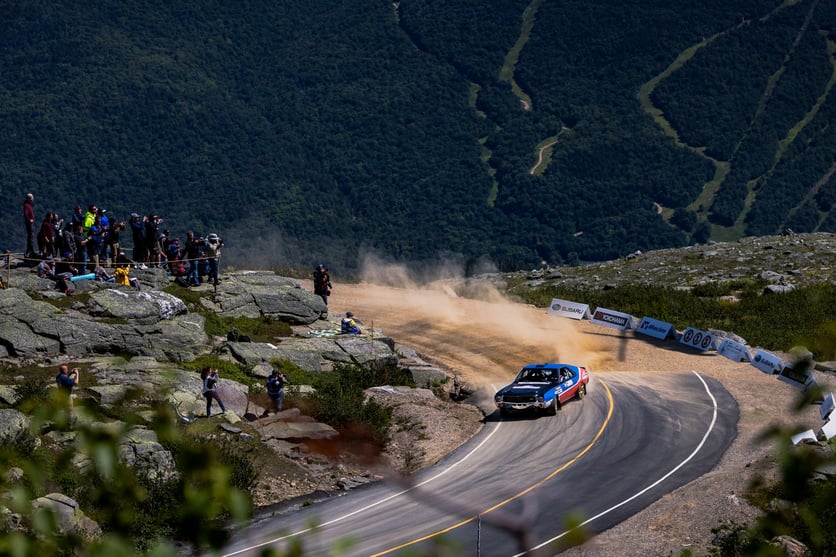 In the past few years, Tim has been collecting and building cars from his youth and career that are significant to him. His latest build is one of his more unique rally car projects as it traces its roots back to American muscle rather than European sophistication. The car in question is a 1969 AMC AMX. 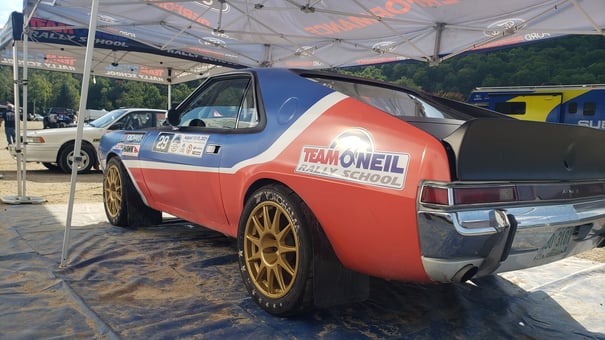 The AMX is special to Tim because it is a car from his youth. He bought one before he even started rallying, but wrecked it before he could ever compete in it. “Racing the AMX is a really big buzz,” said Tim. “Back in the day I didn’t realize they didn’t handle that well, and now 40 years later all of the problems that I had are mostly resolved. Even if I wanted to build one 40 years ago it never would have worked. Tim’s current AMX build retains a period motor but brings in some modern updates to make it competitive in the current climate. Gone is the original suspension setup in favor of some new components from an E36 chassis BMW 3 Series. The AMX also has an E36 steering rack and a Jericho transmission. 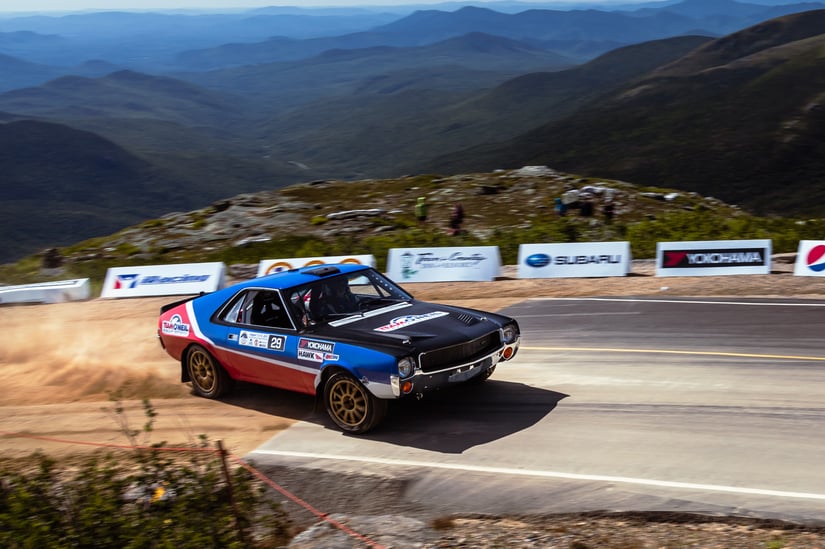 According to Tim, driving the AMX up the auto road was a very unique experience. “I have never done Mt Washington in a rear wheel drive vehicle,” said Tim. “I’ve always taken a rally car, usually with less power and usually lighter so it was a bit of a wrestling match trying to get this thing up there.” Despite the challenge, Tim said he really liked driving the AMX in the hill climb. “I really enjoyed that American sound and I know the spectators were loving it too,” said Tim. 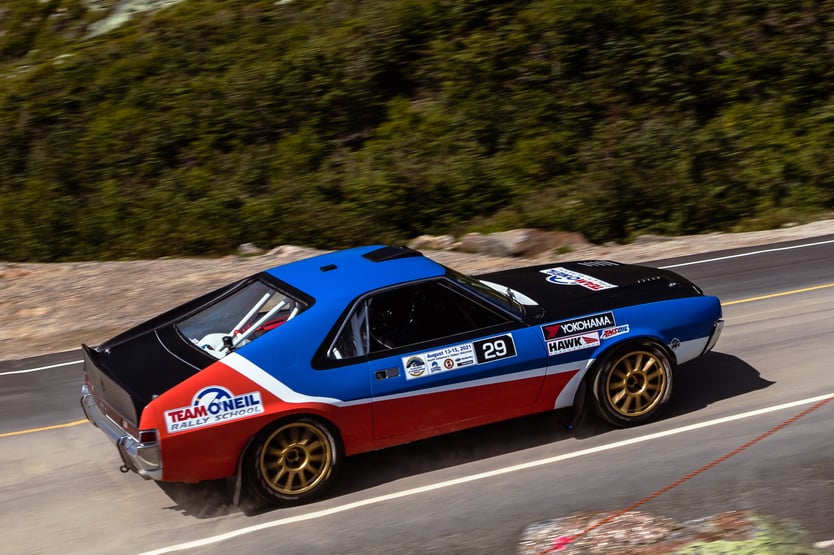 At the end of Climb to the Clouds, Tim’s fastest time was 7:42.8 and he finished 7th in his class. Tim hopes to do more events in the AMX moving forward including some stage rallies. Make sure to follow Team O’Neil so you can follow the action! 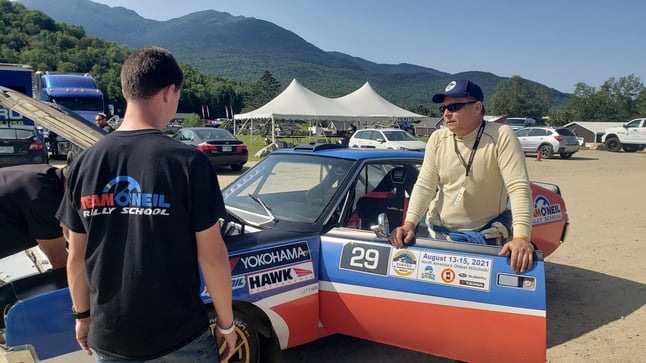 Check out other blogs and stories: Team O'Neil Blog

Looking for how-to, tips, and other videos that could be beneficial: Team O'Neil YouTube Channel

Remember to subscribe below for our E-Newsletter where we provide monthly updates, stories, recaps and previews of the what's going on at Team O'Neil.

Ready to get in the seat and learn:

Special thanks to Chris Allen for the action shots of the AMX.  Check him out and follow him on Instagram @chris.creationmachine. 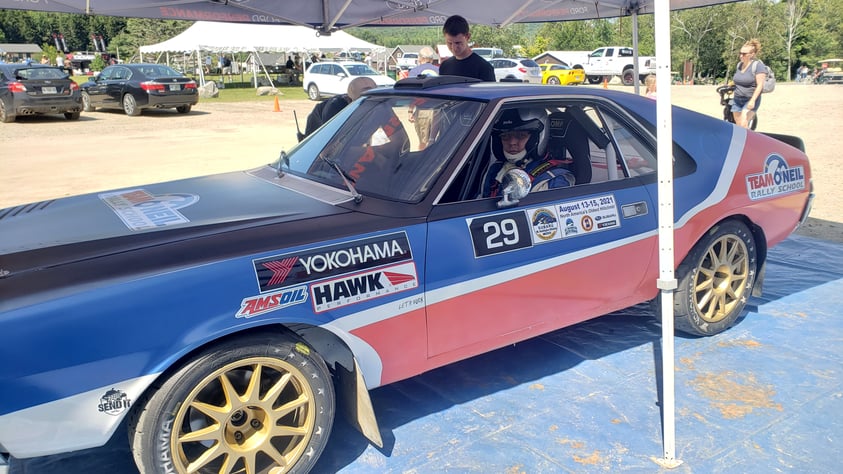