In the lead up to the New England Forest Rally last week, Head Hoonigan in Charge, Ken Block and his team spent three days at Team O’Neil getting ready for the rally. Amongst the testing and practice, members of the Hoonigan team went through the rally school including Block’s daughter Lia, his wife Lucy and 16 year old Baja 1,000 veteran Jax Redline. Redline competed in his first rally at NEFR this year in Block’s Ford Escort Cosworth V2, (aka the Cossie). 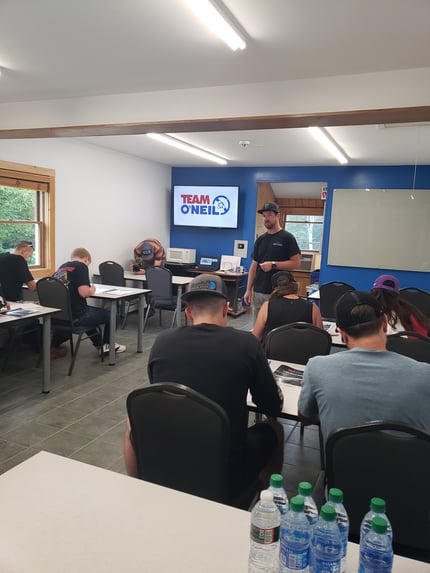 Block and his family were excited to spend time at the rally school. “I absolutely love coming to New England, it's one of the most beautiful parts of the country and it's a hotbed for the thing I love, which is rally,” said Ken. “Being able to come to Team O’Neil and do the New England Forest Rally closeby, it's always a great trip. My wife and kids always enjoy coming on this trip too.”

The team’s training began, like all of our Rally Schools, in our front wheel drive Ford Fiestas. We worked on getting everyone used to using left foot braking and weight transfer to rotate the car. Once familiarized, the class practiced linking corners and performed pendulum turns using the concept of side to side weight transfer. The Hoonigan private training was a modified version of our three day school, starting their second day with our all wheel drive Subarus and working on trail braking. Lia Block spent an extra day with our instructors, including Chief Operating Officer and Rally Champion Travis Hanson, improving on more advanced skills  on more technical road loops. 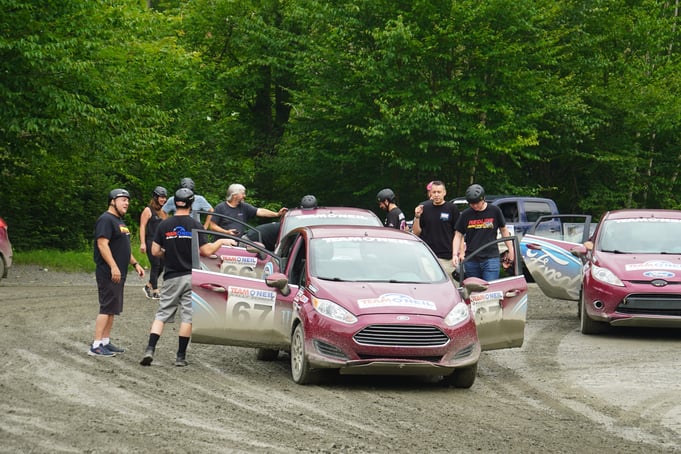 Tom Peplinski, lead instructor for the class, was impressed with Lia’s skills behind the wheel. “Lia was a little timid at first,” said Tom “But she was a really quick learner and it was awesome to see her progress.” Tom said Lia proved to be very quick by the end of her third day of training.  “She’s fast, she pushed herself but not so much that we would crash or do anything dangerous, she was finding that nice balance of pushing the limits and then getting comfortable with that.” 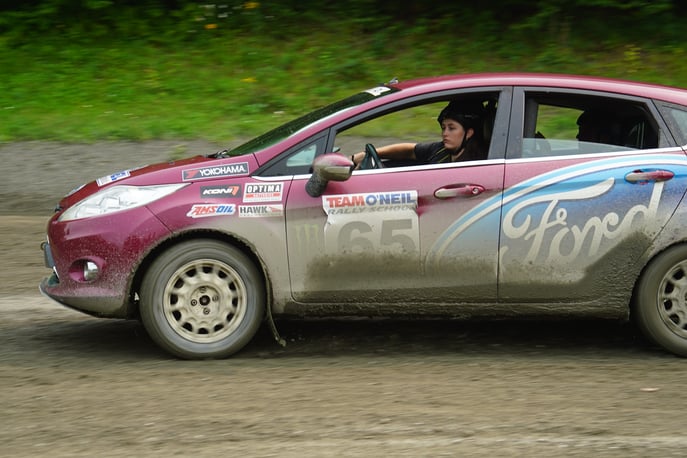 Ken, his wife Lucy Block and Redline used the Team O’Neil roads to sharpen their skills and shakedown their cars for the New England Forest Rally. As NEFR was Redline’s first time competing in a full on stage rally, he was eager to log some miles in the Cossie before the event. Over the course of a day and half, Redline was able to get valuable seat time on across the 600 acres of Team O’Neil roads, getting used to the car and further developing his new stage rally skills. 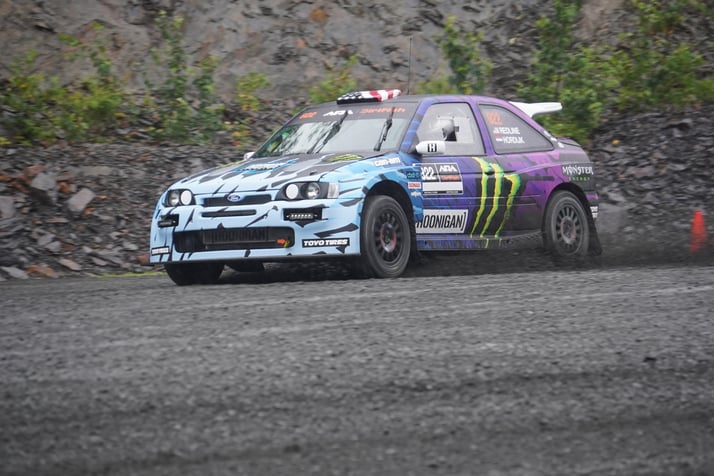 This was Lucy’s return to stages after a two year absence from racing.  She spent time with Team O’Neil instructor Brent Trail to get her more comfortable in her Ford Fiesta R2 prior to the rally.  Lucy and her co-driver Krista Skucas recce’d before taking their R2 out for multiple laps on our testing loop. Ken put in many hours in the Vermont Sportscar Subaru WRX STI before he broke out arguably the most interesting vehicle in the Hoonigan stable. 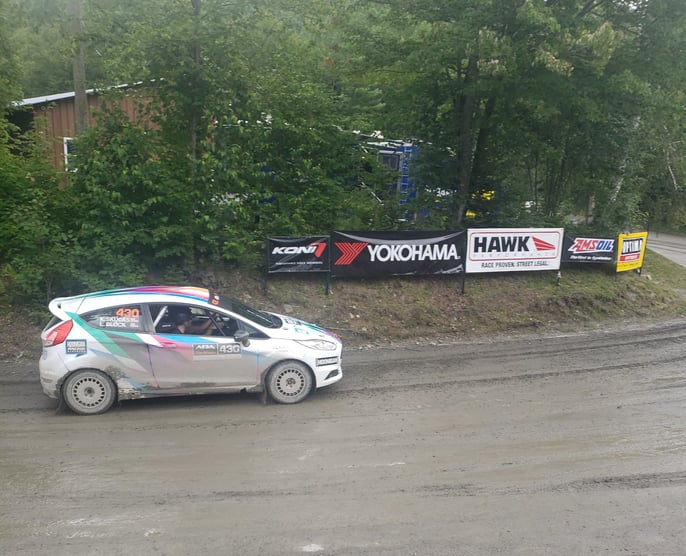 Later this year Ken will be competing in the Baja 1,000 in a Geiser Bros G6 trophy truck with Jax Redline and Alan Ampudia as his teammates. In a video on Ken’s YouTube channel, the Team O'Neil roads served as the playing field for a two way time trial between the trophy truck and his Vermont Sportscar Subaru STI. The trophy truck was a seriously cool spectacle to watch on stage. Its soft long travel suspension created some gnarly body roll and a strong 1,000 horsepower going through the rear wheels made for some exciting oversteer moments. As exciting as it was to watch the trophy truck drift and wallow through the stages at high speed, it was evident that it is more at home on the desert stages of the Baja 1,000. As a result, the Subaru came home with the win beating the trophy truck by 23 seconds over a 2.5 mile stage. 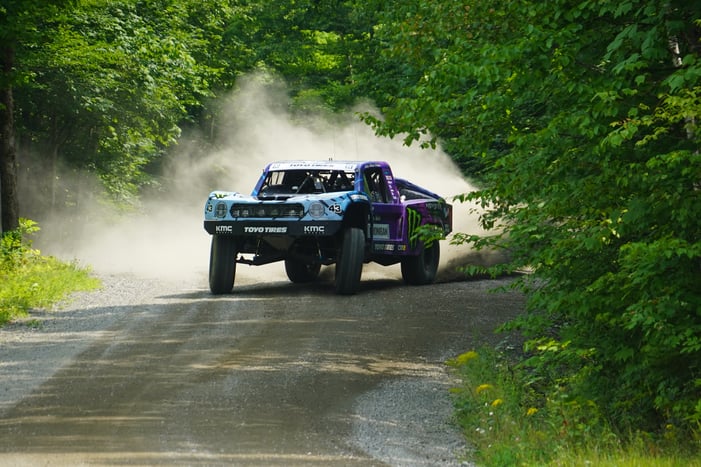 After a year off from the New England Forest Rally, it was nice to have the rally buzz in full swing last week. From training young aspiring rally drivers with potential to seeing some incredible machines tearing up our roads, it's safe to say we were honored to host Hoonigan for the leadup to this year's New England Forest Rally. Stay tuned for more stories from the rally in the coming days! 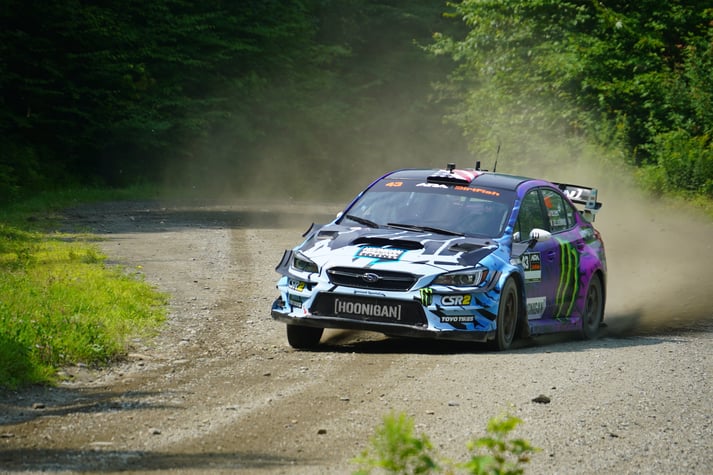 To book your own visit to Team O'Neil Rally School to get your training where Ken Block and Team chooses:

Visit our site and get more information: