To commemorate the 25th Anniversary of Team O’Neil, we want to celebrate the people, memories, experiences and unsung heroes that have made the last quarter of a century of driver training special. Amongst the many unsung heroes are the cars that have made up our extensive fleet of vehicles over the 25 years. The fleet may have changed and evolved over the years, but the cars have always provided students with diverse vehicle types to put the coaching and instructions to the road and hone their car control skills. To celebrate the cars of Team O’Neil’s past, every month of this year, we will be showcasing a car from our fleet to honor its services to the Team O’Neil students and staff. This month, we are putting the Audi 4000 Quattro in the spotlight, one of the first cars to be inducted into the Team O’Neil fleet. 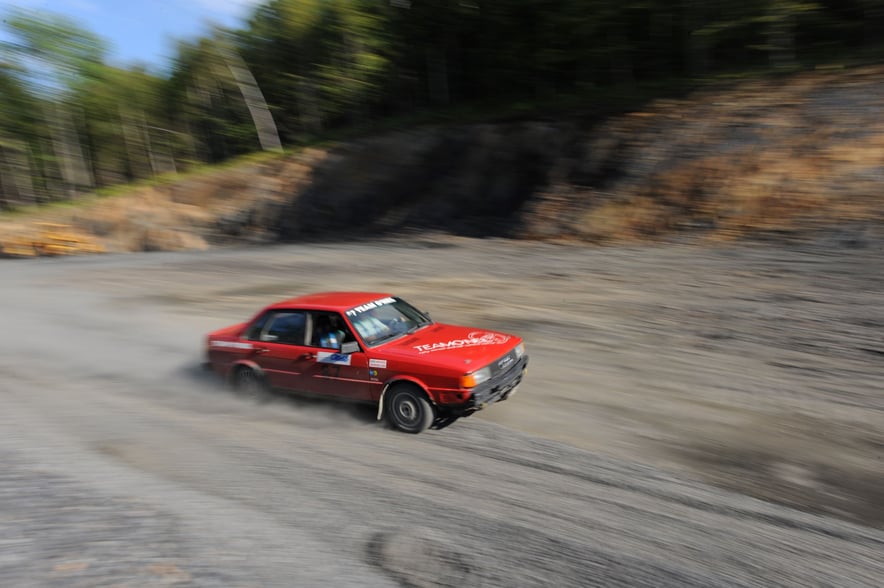 The Audi 4000 first hit US showrooms in 1980 and established itself as a budget friendly entry point into a high end european brand. Early 4000s were front wheel drive and powered by an anemic 4 cylinder engine. As the years went on, the 4000 got an exterior facelift, an upgraded 5 cylinder powerplant and the famous Quattro all wheel drive system that propelled Audi to unparalleled success in the World Rally Championship. The 4000 may not have been a performance variant but it still had trickle down technology from Audi’s racing program. 4000s even had a switch on the dash allowing drivers to lock the center differential on the fly, increasing capability in slippery conditions.  The go anywhere traction and trickle down rally technology in a luxury sedan gave the 4000 a cult following in snowy climates and made it a common platform for grassroots rally teams in the United States. These attributes also made the high achieving Audi the car of choice for an all wheel drive training platform in the early days of Team O’Neil. As the years wore on and the fleet of 4000s aged and parts became increasingly harder to find, it was phased out in favor of the Subaru Impreza. Although the Audis are no longer part of our rally school fleet, they will always be remembered fondly as a significant car in the Team O’Neil story. 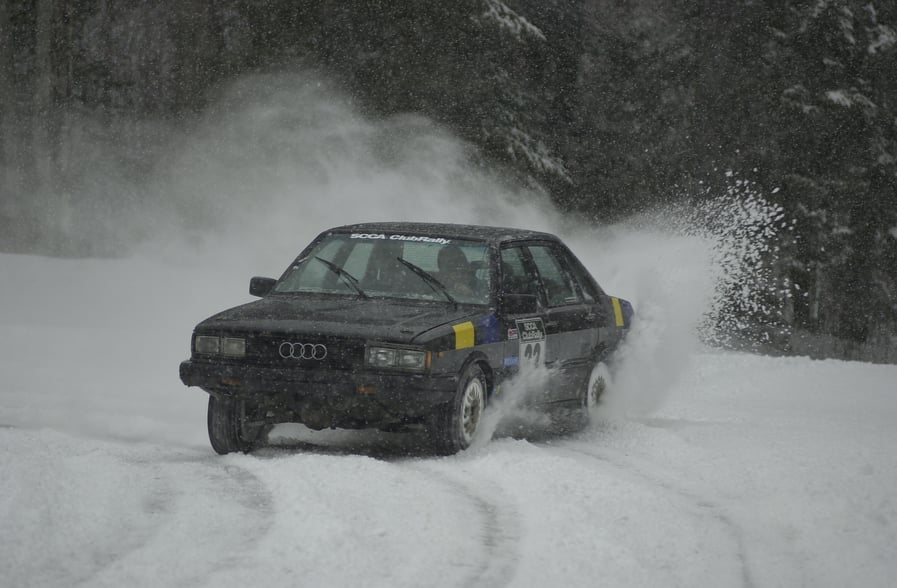 The Audi 4000 is an interesting car dynamically. In order to fit its all wheel drive system, the engine had to sit in front of the front axle. This coupled with a locked center and rear differential meant that the Quattro demanded a unique and aggressive driving style. “Driving a Quattro is a blast,” said veteran Team O’Neil instructor Alan Moody. “They give a lot of good feedback and they like to be pushed hard.” Because of these unique dynamics, the Audi 4000 was a good platform for teaching students proper car control. “To get a 4000 Quattro to turn, you had to have good technique,” said Alan. “Especially on snow and ice with a locked center and rear diff you really had to be on it to get it to rotate.” 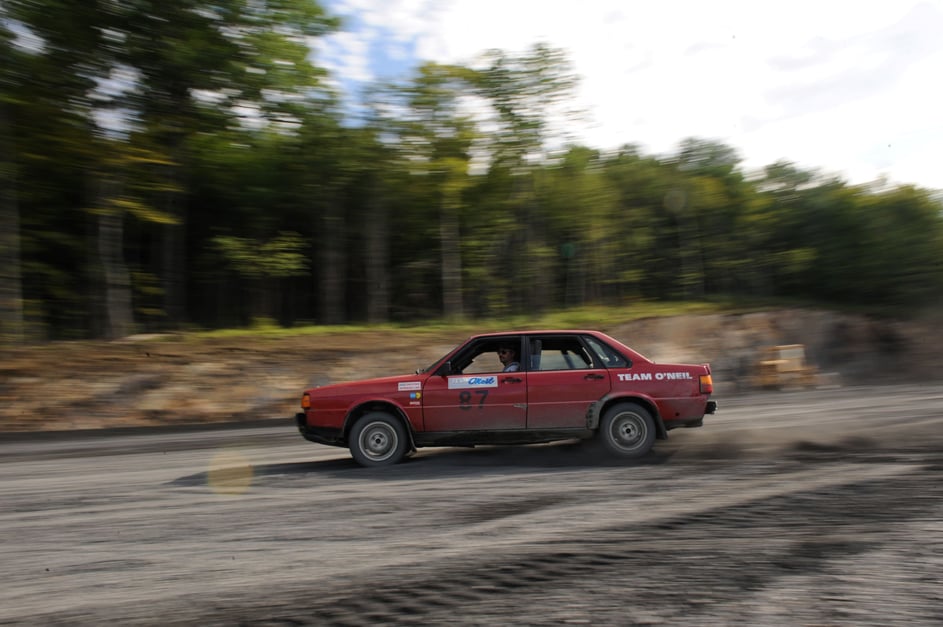 Amongst the employees of Team O’Neil, the Audi 4000’s skid plate design was referred to as the saber tooth in reference to its unique design. Because the 4000 Quattro is an early attempt at a four wheel drive passenger car, the packaging of the mechanical components was unconventional. When modifying the 4000 for life as a rally school car, the unique placements of major components demanded a specially designed skid plate and mounting bracket. One of the most vulnerable components on the 4000 was the crank pulley which hung down just below the bumper. In a front end crash, the crank pulley would be pushed back, exerting forces on the rest of the driveline and causing extensive damage to the whole car. As a result the skid plate needed to not only provide coverage of the front end of the car, but extend beyond the front bumper to protect this vulnerable component in a frontend crash. Additionally, the side mounted radiator meant that the skid plate design needed to allow airflow and prevent the infamous five cylinder powerplant from overheating under hard driving. These design briefs necessitated the tubular skid plate mounting resembling a saber tooth tiger and thus the saber tooth nickname was born. 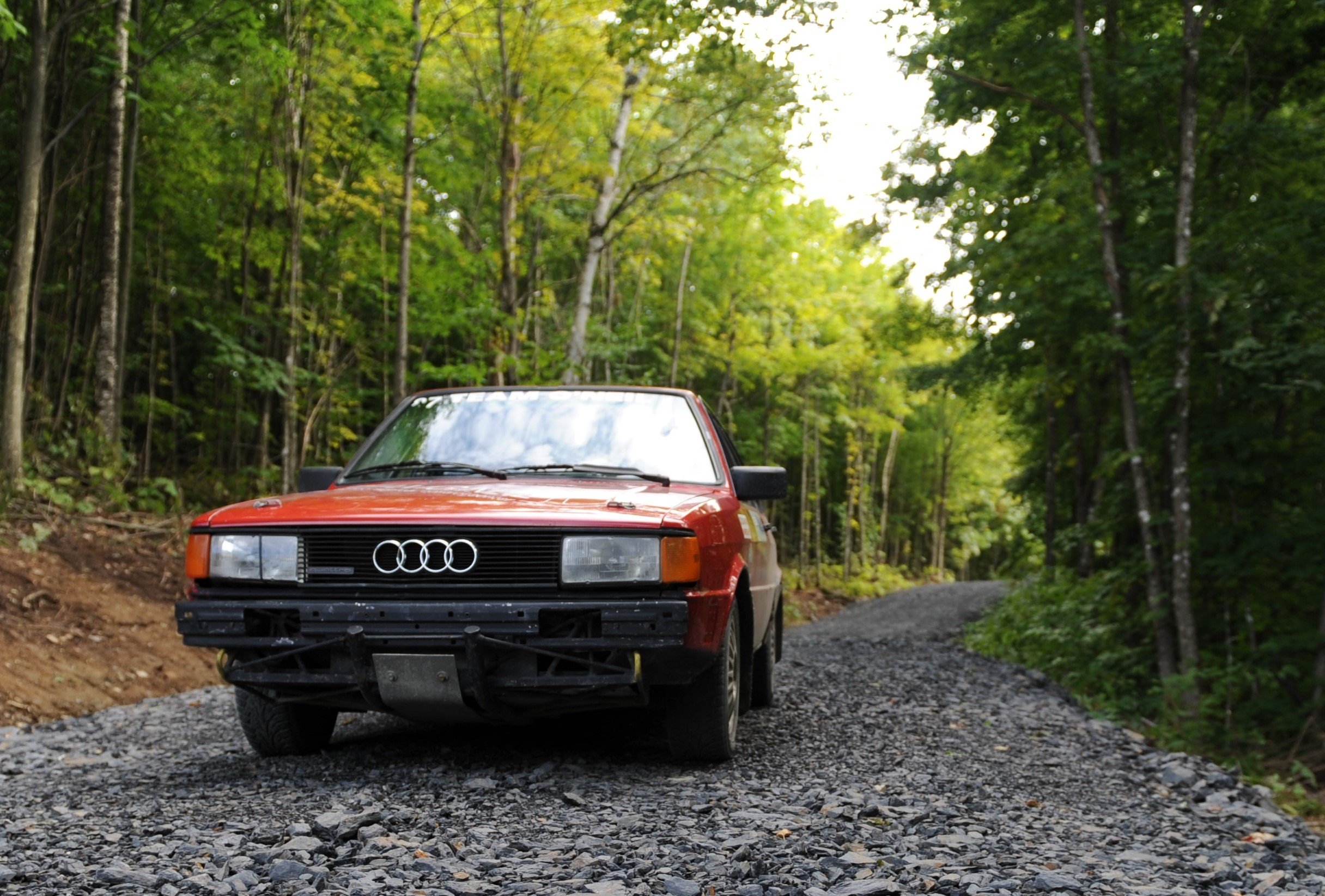 As the late 1990s past and the late 2010s rolled around, the fleet of 4000s aged, parts became increasingly harder to find and it was phased out in favor of the Subaru Impreza as the all wheel drive training platform for the next generation of Team O’Neil students. Time moves on and the Team O’Neil fleet has to progress to maximize training value but, the days of the Audi 4000 will be missed by the Team O’Neil staff and past students. They represent an old school driving experience that demands a unique skill set that is hard to find in modern cars. After many years of valuable service, lots of fun memories and countless drivers trained,  the 4000 will certainly be remembered fondly by the Team O’Neil community. 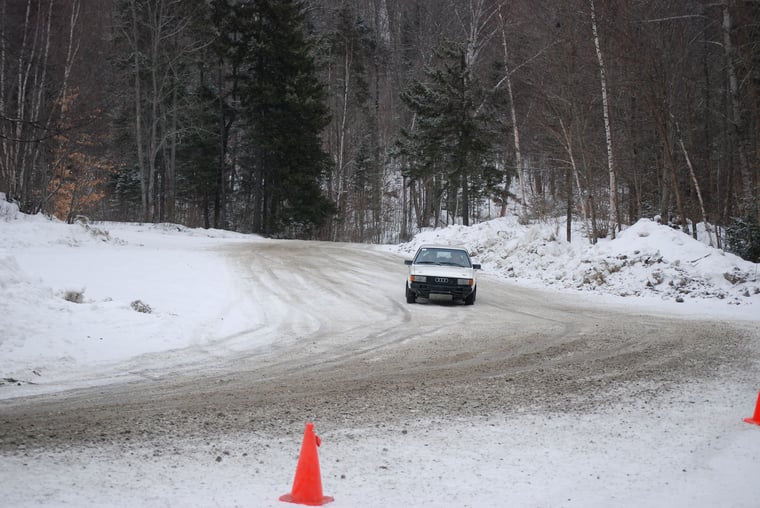 Want to learn more about Team O'Neil, check our our site: Click Here

Ready to book or learn more on our driving course:

For more stories from Team O'Neil, check out Our Blog!

Don't forget to sign up for our E-Newsletters to get the latest updates at Team O'Neil.  Sign up Below!!