Intro: To commemorate the 25th Anniversary of Team O’Neil, we want to celebrate the people, memories, experiences and unsung heroes that have made the last quarter of a century of driver training special. Amongst the many unsung heroes are the cars that have made up our extensive fleet of vehicles over the 25 years. The fleet may have changed and evolved over the years, but the cars have always provided students with diverse vehicle types to put the coaching and instructions to the road and hone their car control skills. To celebrate the cars of Team O’Neil’s past, every month of this year, we will be showcasing a car from our fleet to honor its services to the Team O’Neil students and staff. This month, we are putting the MK2 Volkswagen Golf and Jetta in the spotlight.

MK2 Golf and Jetta History: The A platform from Volkswagen was a major change for the company when it was released in the early 1974 in the form of the original Golf. It was developed to replace the Beetle as a people’s car for a new generation of car buyers. Known internally as the A1, the MK1 Golf was a huge success. As the years went on, the A1 platform spawned many significant Volkswagen models including the Jetta, Scirocco and Golf GTI, the car that created the hot hatchback market segment.

The A1 was so successful Volkswagen decided it deserved a revamp and introduced the A2 platform Golf, more commonly known as the MK2 Golf, in 1983. Just as they had done before, the new A platform was used to create other models such as the MK2 Jetta and Scirocco. The MK2 Golf and Jetta were all things to all people. The Giugiaro styling meant it had class and style. The front wheel drive packaging meant it was practical. And the GTI and GLI versions gave it credibility as a legitimate driver's car.

Volkswgen even campaigned the MK2 in the World Rally Championship in the form of the GTI 16 valve. With Swedish driver Kenneth Erikson behind the wheel, the MK2 GTI won the Group A class in the 1986 WRC. Team O’Neil Founder Tim O’Neil raced the MK2 Golf GTI in 1988 and 1989 in the SCCA 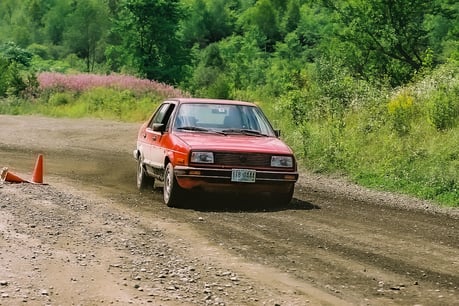 Pro Rally series where he won the Chattahoochee Forest Rally in 1989 and Rally of the Tall pines in 1988 and 1989. Volkswagen continued to develop the MK2 platform culminating in the all wheel drive G60 Rallye Golf Syncro. The Rallye Golf competed in the

World Rally Championship in Group A. It also competed in the United States where it notably set the record up Mount Washington at the hands of our fearless leader Tim O’Neil.

Aside from factory backed efforts, the MK2 Volkswagen also became a staple of grassroots rally. In the 1990s and early 2000s, MK2 Golfs and Jettas were widely available for affordable prices. They had a lot of aftermarket support, had good dynamics and were a robust platform to go rallying in. Before the reign of the Ford Fiesta, the MK2 Volkswagen was the FWD platform of choice for grassroots rally teams.

The MK2 Golf and Jetta at Team O’Neil: The MK2 Volkswagens were the front wheel drive training car at Team O’Neil from the very beginning. Because of Tim’s successes rallying MK2 Golfs and the popularity of Golfs and Jettas in rallying at the time, it was the perfect car to teach students proper front wheel drive car control techniques in a car they might actually buy, build into a rally car and compete in. “Most rally cars are built out of cars specifically designed to be rally cars. The Volkswagen Golf was a vehicle manufactured with that in mind.  It was very strong, easy to work on, handles well, and a front-wheel drive car.  I won many rallies in the Volkswagen Golf and gained a lot of respect for these vehicles.  The choice to run the Golf and the Jetta was an obvious one.” Tim said, about choosing the Volkswagens.

A fond memory of Tim O’Neil was with one of the first Golf that started Team O’Neil. He was giving a demonstration and came around a turn. “I decided to do a fancy Hollywood-handbrake turn. Well I had a flat tire and didn’t know it. When I did that fancy turn, my wheel dug in and I rolled it right in front of all these people.”  Tim got out wondering why it rolled and saw the flat tire.  “To me, I said the only thing I did wrong was, I didn’t know it was flat.  Rolling it was not the problem.  With these vehicles, you could roll it over and the doors would still open, the windows wouldn't break.  It was one of those situations where I don’t usually screw up like that, but I did that day.” The car was stout and went right back into action, a proof of these vehicles durability and reliability.